Joey (in Palo Alto, CA), the nearby graphic shows the migration route and breeding/non-breeding ranges of this warbler.

Often difficult for birders to detect, the Connecticut Warbler’s life cycle is poorly known in comparison to most of North America’s other warblers.

For example, it was nearly 70 years between the time of this bird’s discovery and the first description of its nest in 1883.

We do know it tends to prefer brushy margins of open woods, especially wet areas such as the edges of spruce bogs and meadows. Similar habitat quality is often utilized during the non-breeding season. Estimates suggest 92 percent of the world’s population breeds in love-elevation boreal forest in North America.

Does the Connecticut Warbler primarily eat insects similar to most other warblers? Yes, but it may also eat seeds and berries, especially during the non-breeding season.

As for migration, the Connecticut Warbler flies in a migration route similar to the Blackpoll Warbler: an elliptical pathway that spans disjunct areas in spring and fall. In many years, the Connecticut leaves its breeding grounds by mid-August, with latter departing individuals gone late September in the West to early October in the South. The bulk of population flies east to southeastern New England, then moves south along the Atlantic coast to Florida and, eventually, to South America.

Researchers believe the non-breeding range lies nearly entirely within western Amazon Basin. In spring, northward migration begins late, with most individuals flying through the West Indies before arriving in Florida. Subsequently, many individuals fly northwest through the Mississippi Valley, arriving on the breeding grounds in mid-to late May (though tardy individuals sometimes arrive as late as early to mid-June).
Posted by Daniel Edelstein, M.S. at 10:54 AM 1 comment:

Is identification of warbler migration night calls possible? How do we ID warblers from their night migration calls? 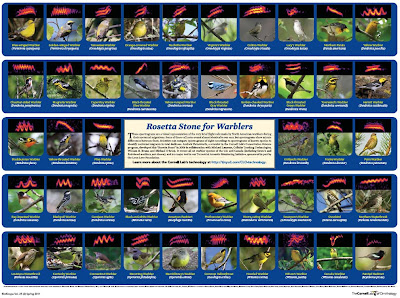 Yes, based on the amazing recent work of researchers at Cornell Lab’s Conservation Science program.

The spectrograms correspond to all 48 warbler species of the U.S. and Canada (including Grace’s and Red-faced warblers, not shown), and is a major tool in the Lab's Acoustic Monitoring Project.
Posted by Daniel Edelstein, M.S. at 8:46 PM 2 comments: