Which wood-warblers are known to feed on fruits and nectar? 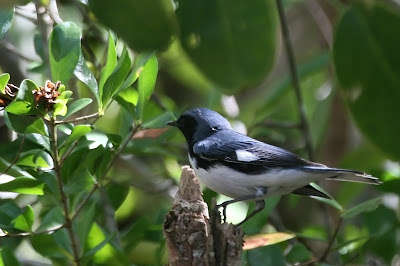 Many of North America’s wood-warblers consume fruit and nectar, especially during the non-breeding season.

Three of the most notorious species are Dendroica congeners Yellow-Rumped, Black-Throated Blue, and Cape May Warbler. (Some Vermivora genus members, too, are known for eating fruits/nectar, given they probe well with longer, thinner bills than Dendroica genus members’ that have bills primarily adapted for insect eating.)

Yellow-Rumped populations during the non-breeding season often remain in far northern latitudes in comparison to other wood-warbler species that are obligatory migrators forced to vacate areas where they breed. Yellow-Rumped is often able to remain in northern climes throughout the winter (e.g., Wisconsin and New England during some, but NOT all, non-breeding seasons) because, depending on its location, may subsist on foods such as poison ivy berries, wax myrtle berries, and/or privet berries – fruits, in fact, from which the majority of other songbirds are unable to derive much energy.

Black-Throated Blue, likewise, are documented to
eat small berries and fruits. They also feed at flowers, possibly for nectar or insects. During the non-breeding season in the Dominican Republic, this species feeds frequently on honeydew-like excretions from scale insects.

As for Cape May, non-breeders are often easily observed and are known to feed on nectar, among other things, taken up by means of a semi-tubular tongue. They also eat insects and fruit from Cecropia trees, grapes and grape juice, and tree sap. In some cases, this species has caused damage to commercial vineyards in Indiana, Pennsylvania, and W. Virginia by puncturing grapes, thereby damaging all grapes not bagged.

As a personal observation note, I remember several autumns in Wisconsin and Maryland when I watched transient Black-Throated Blue feeding on various berries. Staking out the same patch of shrubs each autumn invariably resulted in the presence of watching the berries disappear over a few days – while I enjoyed seeing female, male, and hatch year individuals of this species up close.
Posted by Daniel Edelstein, M.S. at 3:05 PM

I just filmed (and posted on YouTube) a Tennessee Warbler robbing the nectar from a salvia bed. How many warblers do that on a regular basis?

Here's the link to the movie. (http://www.youtube.com/watch?v=cCrHvykCalA&feature=share&list=UU-Q-eORu_VVtkbmOgaSpH7A) I narrated it to explain what was happening and edited the shots to illustrate the narration.