Are Pt. Reyes & the Farallon Islands the best W. Coast spots to see E. Coast vagrant warblers? Is it rare to see CT Warbler in CA?

Excellent questions, Jason. Answers: 1. The book “Rare Birds of California” is an fine resource for your questions.

CT Warbler is a rare vagrant at the spots you mention, though it’s also been recorded as a vagrant from s. British Columbia south to n. Baja CA. Vagrants have also been seen in C. America and the western Caribbean. The initial confirmed record of CT in California was a spring male collectedon June 16, 1958 on southeast Farallon Island, a location that claims first state records of five other wood-warbler species. 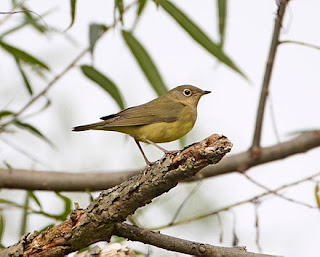 (Above: Connecticut Warbler, courtesy of Wikipedia)

True fact (that is amazing): More than half of CA’s CT sightings originate from one rock on southeast Farallon Island.

Vagrant (“accidental”) warbler species are NEVER common on the West Coast, but they are always annually seen. Point Reyes National Seashore is often a fine place to see them in September and October, especially within Monterey Cypress groves that occur sporadically within and near ranches on the way to the Outer Point/Lighthouse area within the park. Foggy/cloudy days are often the best conditions to see “layover” individuals. Some of the best areas to visit in pursuit of vagrant East Coast warblers here include the Drakes Beach, Chimney Rock, and Lighthouse areas.

To find this location, contact the park's rangers or email me: danieledelstein@att.net
Posted by Daniel Edelstein, M.S. at 9:06 PM