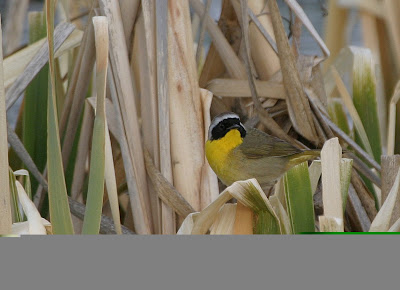 Thanks for the question, Barbara S. in Spokane.

Noting the New World is a geographic designation corresponding to the Western Hemisphere, Old World warbler species live within the Eastern Hemisphere areas of Europe, Asia, and Australia – with only a few species (e.g., gnatcatchers) existing in the New World/Americas.

Approximately 350 Old World warblers occur in the Sylviide family. New World warbler species total around 120 species and most of them are in the Parulidae family.
(Approximately 52 are annually seen in the USA north of Mexico, with the most common being Yellow, Common Yellow-throat (above photo), Yellow-Rumped, among others.)

In fact, the Olive Warbler (the sole Peucudramidae family member) is the only non-Parulidae family species among North American wood-warblers to occur north of Mexico.

Note there’s also the Australasian warblers in the Acanthizidae family that include gerygones, thornbills, and scrubwrens,.

This family is native to Australia, Indonesia, New Zealand, and the south-west Pacific. Australia hosts 35 endemic Acanthizidae family members and New Guinea 15. A single species is found in Vanuatu, New Caledonia and the Solomon Islands, and three species occur in the New Zealand region, including endemic species in the Chatham Islands and Norfolk Island. In Asia two species are restricted to Indonesia and another is found in the Philippines and on mainland Asia. Most species are not migratory, with the exception of the gerygones.
Posted by Daniel Edelstein, M.S. at 12:16 PM 201 comments: 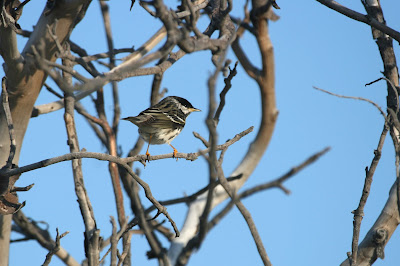 Thanks for the question, David in Studwell, MN.

Autumn studies of the routes south-traveling Blackpoll take have been extensive. Through banding at stations where the same individual has been studied, researchers have determined some Blackpolls travel more than 5,000 miles one way from Alaska to Brazil.

For many Blackpoll migrating populations, migration occurs over the Atlantic Ocean from the northeastern United States to Puerto Rico, the Lesser Antilles, or northern South America.

This route averages 1,500-2,000 miles over water, necessitating a potentially non-stop flight of up to 88 hours. To complete this migration feat, many Blackpolls nearly double their body mass and prefer to take advantage of a shift in prevailing wind direction to direct them to their destination.
Posted by Daniel Edelstein, M.S. at 5:33 PM 3 comments: