Can you name a common wood-warbler that migrates early throughout the USA? 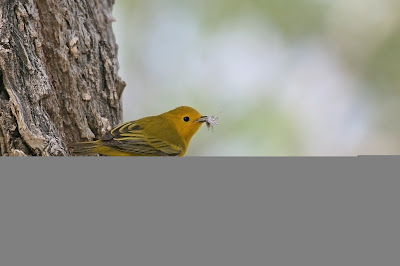 If you said “Yellow Warbler,” then you’re correct.

Rather than merely identifying this species as among the earliest “fall migrants” within the wood-warbler family, it’s apt to state the Yellow Warbler is an early “summer migrant.”

Dispersal and/or migration begins by mid- to late July throughout the majority of its eastern USA breeding range.

Migration of Yellow Warbler on the West Coast is not as early, typically initiating in August and peaking later in the month and into early September.

In addition, note this species has protracted migration, as some tardy individuals have been noted in Pennsylvania as late as October 1st and into late October from sightings in South Carolina and Florida.

Earliest arriving transients from the north into Mexico have been detected by late July. Most individuals, however, arrive in non-breeding territory by August, with peak numbers returning in September and October.
Posted by Daniel Edelstein, M.S. at 10:27 AM No comments:

According to a Wisconsin Dept. of Natural Resources news release, bird monitors have confirmed the presence of six Kirtland's Warbler nests, with four hosting nestlings and two hosting eggs.

Eleven males in the state have been banded.

To read the news release, go to:

Of course, historically and through 2006, Michigan was considered the endemic breeding range of this species.
Only periodic, non-annual sightings were reported in Ontario and Wisconsin, with no documented nests found.
This scenario changed in 2007 when Kirtland's was confirmed as a nester in Wisconsin.

The presence of the aforementioned breeding individuals marks the third consecutive season of documented Kirtland's in Wisconsin.
Posted by Daniel Edelstein, M.S. at 10:51 AM 12 comments: 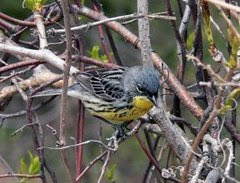 . . . as many as 18 individuals seen this breeding season

It is the third consecutive breeding season that the normally Michigan endemic wood-warbler has been confirmed breeding in the state -- which historically was graced with only periodic sightings of this endangered species.

To read Smith's article, go to: