Warbler Guy, what are some good warbler identification resources?

Andy (in Lacrosse, WI), I suggest you see:

http://www.warblerwatch.com/warblertips.htm
Posted by Daniel Edelstein, M.S. at 6:25 PM No comments: 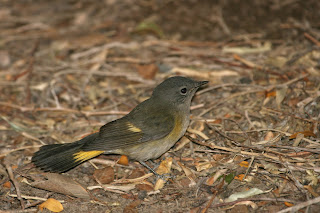 (Above, a first-year male American Redstart is indicated by the slightly burnt-orange/amber outer tail feathers and forward flanks.)

Interestingly, species that spend the winter farthest north, arrive the earliest upon nesting grounds. That makes sense in the case of Yellow-Throated Warbler that arrive early in the spring in the Mid-Atlantic because they merely need to travel from as closeby as the southeastern USA where they spend the non-breeding season. This phenomenon supports the theory that males arrive early to take advantage of food resources and/or when climatic conditions are suitable, whereas females of the same species arrive when conditions are more ideal for successful nesting.

Later arriving species on their nesting grounds, including Blackpoll, travel from as far away as northern South America where they spend the non-breeding season. For this reason, during some spring seasons, it may not arrive on northern nesting grounds until June 1st and beyond.

Other wood-warbler species — Yellow-rumped and Pine Warbler, for example — that can subsist on berries and seeds, in addition to insects, are usually the earliest to arrive on nesting grounds. Among other early arriving species in the warbler march north include Palm, Black-and-white, Nashville, Wilson’s, Louisiana Waterthrush, Prothonotary, Northern Waterthrush, Wilson’s, and Yellow.
Posted by Daniel Edelstein, M.S. at 5:27 PM No comments: