Warbler Guy, I heard World Migration Bird Day is happening soon? When? Where? How do I submit my data from sightings on this upcoming day?

Warbler Guy, what’s an example of a “superspecies” in the wood-warbler family?

What’s an example of a “superspecies” in the wood-warbler family? 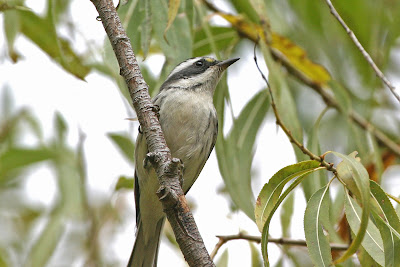 (The Black-throated Gray Warbler in the above photo is one of five species within the Black-Throated Green superspecies group.)

Thanks for the query, Ms. Jones (in Santa Barbara, CA).

Each of the latter four species in the above group is thought to have evolved from its Black-Throated Green ancestor. As this species expanded from its southeastern USA deciduous forest territory into coniferous forest created by the most recent glacial advances, isolation occurred among populations.
As generations of separated populations slowly spread west and north throughout lower North America, each population became a divergent “island.” Gene flow ceased as reproductive isolation caused speciation to occur over eons. The resulting five species share various field marks, but also express their own unique characteristics.

Nonetheless, despite their status as species, hybridization sometimes occurs among species within a superspecies, including the Black-Throated Green superspecies wherein populations of Townsend’s and Hermit hybridize in Oregon and Washington.
To simplify, where both species occur, over time Townsend’s appear to usually dominate and increase in number.

More technical, the five species within the Black-throated Green superspecies have parapatric distributions. That is to say, each of the five species has ranges that do not significantly overlap but are immediately adjacent to each other (and/or occur together in a narrow contact zone, with the aforementioned reference to Townsend’s and Hermit Warbler hybridization a scenario where overlapping occurs).

To learn more about this subject, read a classic article by R.M. Mengel titled “The probable history of species formation in some northern wood warblers.” One source where this article appears is in a 1964 edition of “Living Bird” (page 943). Note: R.M. Mengel's book is accessed via: https://www.amazon.com/PROBABLE-FORMATION-NORTHERN-WARBLERS-PARULIDAE/dp/B000WQF1WE
Posted by Daniel Edelstein, M.S. at 6:41 PM No comments: