Warbler Guy, where are warbler photos best found on the Web? Where may I compare and contrast warbler images online?

Jason (in Buffalo), I recommend the web site operated by Giff Beaton in Georgia.

Giff's "Warblers" site is found at:

Recent systematic name changes in the warbler family are also present in the way Giff organizes his photos, so
information is updated according to the latest American Ornithological Union (AOU) decisions.

His site also features links to bird-related sites; information and photos related to dragonflies and insects; and links to other nature topics (See: http://www.giffbeaton.com/index.html)
Posted by Daniel Edelstein, M.S. at 6:15 PM 2 comments:

And Then There Was One: Connecticut Warbler Now Widow-Widower 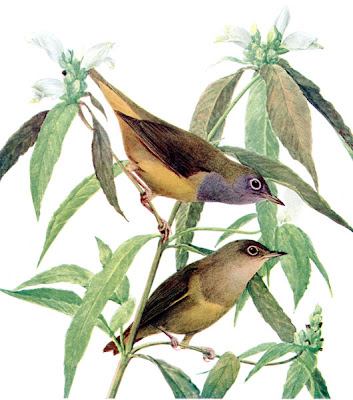 Given the American Ornithological Union's (AOU) recent scientific name changes for wood-warblers (noted in the 9/28/11 article, immediately below),
all of the Oporornis genus members are now gone.

The Connecticut Warbler remains as the lone Oporornis representative. (Kentucky, Mourning, MacGilliviray's were subsumed into the Geothylpsis genus that formerly in N. America merely consisted of the Common Yellowthroat.)

During the nesting season, the often stealth, ground-dwelling Connecticut Warbler is frequently confidently ID'ed by savvy birders who know it walks (along with only four other N. American wood-warbler species). The large eye ring is another prominent feature. Notice how the throat color pattern differs from the look-alike Nashville Warbler, which features yellow throughout the throat (in contrast to the gray throat/chin sheen in Connecticut).

Most Connecticut individuals have already left the USA as obligate neotropical migrators that will spend the non-breeding season amid the Amazon River area in South America.

Next spring, this species is one of the last wood-warblers to return to breeding rounds and, thus, is considered
a late migrant in comparison to other earlier arriving USA wood-warbler species.
Posted by Daniel Edelstein, M.S. at 10:42 PM 3 comments: