Warbler Guy, did Kirtland’s Warbler nest in Wisconsin again this past breeding season? 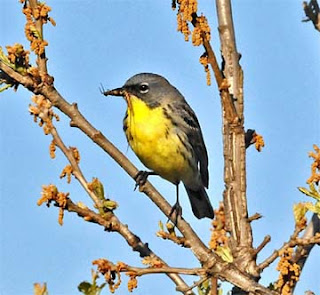 Yes, Avery (in Chicago), the federally endangered Kirtland’s Warbler observations totaled a minimum of 24 male and 13 female individuals in the state. Among 16 nest sites monitored, three to five were successful, appearing to fledge an estimated 12 to 18 newborns.

Monitoring of nests or sightings of Kirtland’s Warbler (above photo) occurred in several Wisconsin counties — Adams, Marinette, Bayfield, Douglas, and Washburn. In Adams County, 20 male and 11 female Kirtland’s were documented. In turn, estimates of fledglings from these totals in 2010 ranged from 12 to 18 among three to five nests.

In Marinette County, a volunteer monitor found a single Kirtland’s at the same site where he documented nesting in 2009. Another single Kirtland’s male was also reported at another site in the county where birds were found in 2008 and 2009, and three males were documented at a third site.

In Douglas County, a single Kirtland’s was seen on the same date as the aforementioned Kirtland’s observed in Bayfield County. However, a follow-up visit by researchers failed to detect any presence of Kirtland’s so nesting could not be confirmed for 2010 here.

In Washburn County, a male Kirtland’s was observed, but a nest could not be found.

Interestingly, all 10 banded male Kirtland’s present in Adams County in 2009 returned in 2010, including one individual that had been originally banded in the Bahamas.

This year’s breeding results confirm that Kirtland’s Warbler has nested for four consecutive breeding seasons in Wisconsin. This sequence in unprecedented in the monitoring of this species that previous to 2007 was thought to primarily to exclusively nest only in 10 or so north-central Michigan counties. Given the now-annual breeding of Kirtland’s in Wisconsin, it’s safe to suggest the species now regularly nests in both states.
Posted by Daniel Edelstein, M.S. at 3:12 PM No comments: