Warbler Guy, which wood-warbler sang first in the movie The Social Network's sound track background? Why was it probably the wrong species? 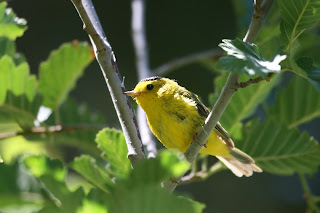 So how could a Wilson's Warbler (ABOVE photo) sing near Harvard's campus in the crew racing scene that appears
soon after The Social Network begins?

This vexing question is valid because Wilson's only passes through the Harvard University area (Massachusetts) as a spring and fall transient.

BUT the scene in the movie depicts a summer atmosphere, post migration, when Wilson's would already be farther north on breeding grounds.

Ho-hum. Another movie that cares little that birders compose a portion of the audience.

We are listening, Hollywood. You have it wrong. Our antennae are long.

Film on the floor. Cut up.

Warbler Guy, what are the latest AOU species split proposals? Are Yellow-Rumped Warbler subspecies going to change in number?

(UPDATE: The article below is outdated, given recent name classification changes. Thus, see the 3/7/11 article here at this blog for an update in relation to the Yellow-rumped Warbler split into various subspecies.)

There's an excellent article to read All About It, Robert Z., if you go to:

That's a huge Web site address to copy and paste, I know.....but it's worthwhile reading.

Meanwhile, where I live in the Bay Area (CA), it's common to see two subspecies in many habitats during the non-breeding season:

Warbler Guy, which wood-warblers remain in the USA after the breeding season? 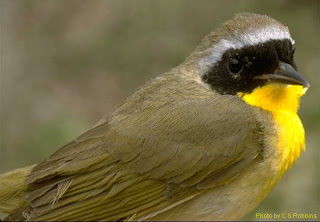