Warbler Guy, has Kirtland's Warbler been seen this year in Wisconsin? Is it nesting again in 2015 within Wisconsin?

Yes, Dennis, Kirtland's Warbler has been reported on five ebird.org checklists noted at:

Whether it's nesting in Wisconsin is still an open question, given I do not yet see the WI DNR or USFWS web sites indicating nesting presence in 2015.

Check back here again soon and I'll have a more extensive update.

Of course, the annual nesting presence of Kirtland's in Michigan has repeated, as 10 or more of this state's counties have hosted this federally endangered species since monitoring efforts began.

One ongoing, perhaps annual nest in Ontario may also again host a nesting pair again in 2015, but I'll have to confirm this phenomenon. Again, please feel free to check back as more information becomes available that I am able to share here.

One related update offers a fascinating discovery:
A banded Kirtland's Warbler from Wisconsin has been recaptured in the Bahamas where this species spends the non-breeding season. See: 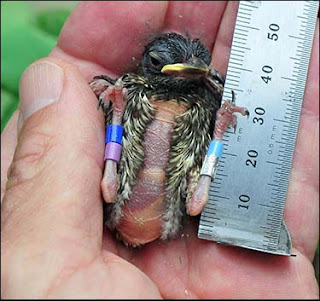 Warbler Guy, do you think Connecticut Warbler could appear as early as May 1st in northern Wisconsin?

It's possible, Joannie......Anomalous early arrivals occur among warbler species that typically show up later in the annual vanguard parade — Connecticut, Blackpoll, and Canada, during many years.

Then again, if you go to this year's ebird.org report for Connecticut, not one report I see in northern latitudes of the Upper Midwest is noted before 5/13/15, per:

To see the arrival times and presence of other wood-warblers for this year's migration, see
Greg Miller's excellent page, per: