Warbler Guy, is there a smart phone app devoted to wood-warblers? Which app features warblers?

I recommend the new warbler app from Princeton University Press.

The one I like is complementary to The Warbler Guide.

I copied and pasted from the Press's web site the following information:

The Warbler Guide App is the perfect companion to Princeton’s revolutionary and widely acclaimed book The Warbler Guide, by Tom Stephenson and Scott Whittle. Taking full advantage of the Apple iOS® platform, the app allows you to identify birds by view or song, quickly and intuitively.

Exciting new 3D graphics enable you to view a bird from the exact angle you see it in the field. And the whole range of warbler songs is easily played, compared, and filtered. Whether for study or field use, this innovative app delivers the full power of The Warbler Guide in your pocket, built from the ground up for the Apple iOS® platform, and complete with unique new app-only features.

Breakthrough features from The Warbler Guide book that are included in the app:

Warbler Guy, which warbler species remain in the USA during the non-breeding season?

Among the breeding 52 North American wood-warblers, only a minority occasionally to annually occur in the USA during the non-breeding season:
- Common Yellowthroat (see photo, below)
- Black-throated Green (Florida and Texas, as the most typical places)
- Northern Parula
- Pine
- Orange-crowned (south Channel Islands, CA and along the California coast)
- Yellow-throated (southeast USA)
- Tropical Parula (in the extreme southern portion of Texas)
- Prairie (a subspecies in south Florida)
- Painted Redstart (southeast Arizona) 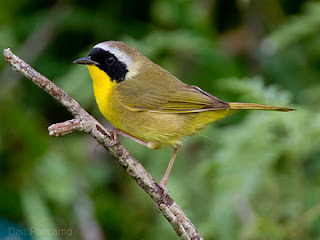