Warbler Guy, I live in the SF Bay Area where I observed in early February a Wilson's Warbler. Do you think it's an early migrant or a non-breeding season resident that is "over-wintering" without migrating?

There's a good chance your Wilson's Warbler sighting was over-wintering straggler that did not migrate farther south like the behavior expressed by the vast majority of this species. (See range map, below, courtesy of Birds of North America online.) 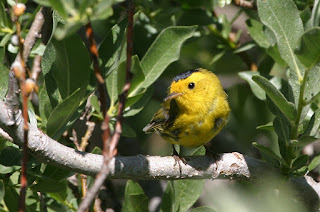 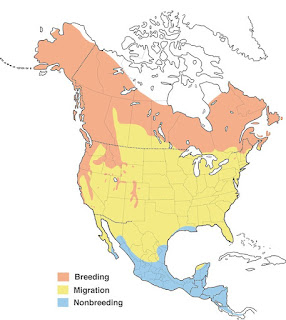 North-bound migrants that over-winter in, say, Mexico may return as early as mid-March in the SF Bay Area, but your early February sighting is typically too early for a true long-distance migrant.

Nonetheless, it's not uncommon for over-wintering Wilson's Warbler individuals to periodically appear throughout the winter months in the northern latitudes of California, including nearly annually sightings during Christmas Bird Counts in the region.