Warbler Guy, which vagrant is the "coolest" to see in the West this autumn? 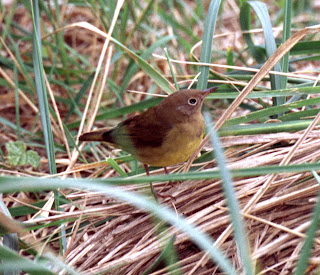 Many vagrant, East Coast/Midwest nesting wood-warblers are eye catching prizes to see
during the post-breeding season, among them the Connecticut Warbler shown here.

The more rare to uncommon (vagrant) ones seen at places such as Point Reyes National Seashore and its Outer Point and Lighthouse
area include:
- Cerulean Warbler
- Black-throated Blue Warbler

Which so-called East Coast warblers are the most common vagrant species to see in this area?

In 2011, Kirtland’s Warbler was recorded in five counties in Wisconsin. Biologists documented a minimum 22 male and 11 female individuals in the state. Among 11 nesting attempts, four nests were successful, fledging an estimated nine to 17 young throughout the state.

At least 1,840 male Kirtland's Warbler now exist, a small total number. BUT an amazing comback for the federally-endangered wood-warbler that was once on the brink of extinction.

Please check back to learn more about this exciting annual nesting phenomenon.
Posted by Daniel Edelstein, M.S. at 9:26 AM 2 comments: