Warbler Guy, why is the Olive Warbler in its own family and not in the Parulidae with all the other New World wood-warbler species? 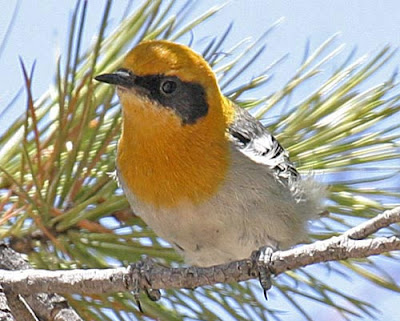 Primarily because of three reasons (John in Cedar Rapids): 1) The shape of a bone in this species’ skull (the basihyal bone); 2) the arrangement of muscles in the legs; and 3) mitochondrial DNA analysis of this species’ blood indicate its status is far removed from New World wood-warblers (though in the past it was classified with the Parulidae).

In fact, some studies have placed the Olive Warbler in the finch clade (i.e., “group”) that has included finches, cardinals and Hawaiian honeycreeper species.

It breeds from southern Arizona and New Mexico, USA, south through Mexico to Nicaragua.

Another interesting fact: It is the only bird family endemic to North America (including Central America).

Recent DNA studies suggest the phylogenetic (or so-called evolution) of the Olive Warbler split early from the other related passerines, and, indeed, prior to the differentiation of the entire New World warbler/American sparrow/Icterid group.

What does the Olive Warbler eat? As an insectivore, it favors coniferous forest. Some populations are non-migratory, though most New Mexican breeding birds leave the state from November to late February.
Posted by Daniel Edelstein, M.S. at 3:06 PM 3 comments:

Warbler Guy, where are the most abundant numbers of different wood-warblers found?

Jess (in Chicago), the highest species numbers of breeding wood-warblers are found in the Appalachian, Canadian maritime, and northern Great Lakes regions.

During the non-breeding season, the most common places to find wood-warblers are Mexico, Central America, West Indies, and north to central South America. The farthest known reaches of wintering wood-warblers occurs in Brazil and northern Chile.
Posted by Daniel Edelstein, M.S. at 12:37 PM No comments: