Here's one general answer, that I dare say is also an oversimplification of this complex topic.

First, you are probably aware from your smart question that a "call" note is a different and distinct vocalization than a "song," — the latter of which is typically a learned and memorize rendition sung in most cases by males as a rhythmic vocalization of one or more phrases (e.g., think of a loquacious Northern Mockingbird). 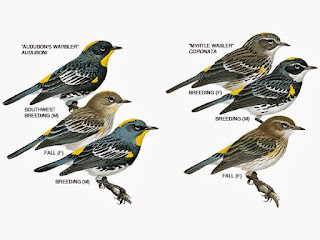 A "call" note is one element.

Most songbirds express one call note, ala your question, above.

This is the case throughout the San Francisco Bay area
where I live. In the fall and through March (and, even,
into April), most of the Yellow-rumped Warblers seen
and heard occur as the Audubon's subspecies.
Sometimes, I am able to spot a Myrtle
subspecies individual....though for every,
say, 100 Audubon's I see in the SF Bay
Area, approximately one is a Myrtle subspecies.

(Note the Audubon's subspecies nests in
a few higher elevations in the SF Bay Area,
including Marin County where I live (20 miles
north of the Golden Gate Bridge).)

In many cases you can hear how the Myrtle
(one of the subspecies of the Yellow-rumped
Warbler species) has a flatter and softer
chip note than the Audubon’s.
The “ch” component of the call note is
weaker for the Myrtle and it often gives
many calls in rapid succession.

However, be careful. Intergrades (individuals
that display visual characteristics specific
to both Audubon’s and Myrtle) may
announce call notes of the other subspecies.
In other words, it’s possible to see a bird that
looks like an Audubon’s, but it’s call note
sounds like a Myrtle. This individual could
likely be an intergrade.

warblerwatch.com
(hosts my resume and my "Birding Tours"
information for N. and Central CA tours that
I have conducted since 2001)
Posted by Daniel Edelstein, M.S. at 9:06 AM 1 comment: