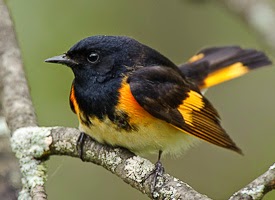 Fact is, American Redstart is not always a vagrant in California when detected during the spring and late summer/fall.

That's because its far western home range into Alaska places it in the pathway of where some individuals may migrate up and down the West Coast.

Equally important, a northern California breeding population in the farthest region of the state has occurred in the past.

As a result, it's possible sporadic to annual breeders in this area could be southward migrating individuals that California birders detect, for example, in the outer point of Point Reyes National Seashore in Marin County or at Bodega Head in Sonoma County.

That written, it's absolutely possible some Midwestern and East Coast American Redstarts are seen in California. The species is abundant and locally common throughout much of its range, so, given the plethora of newborns, it's possible some become disoriented as vagrants spotted on the West Coast.
Posted by Daniel Edelstein, M.S. at 12:45 PM 1 comment:

Warbler Guy, why is it so challenging to find warblers now? Are warblers absent already?

Ned (in New York), there's good reasons why the forest seems devoid of wood-warblers this time of the year. 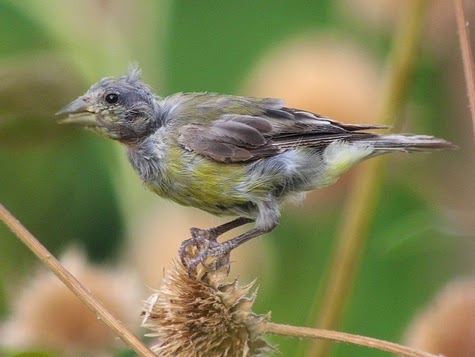 (Above, a molting non-warbler species)

One, many nesters have already completed their cycle, so their fledged newborns have dispersed. The adults themselves have done likewise, with some already migrating south.

Two, many songbirds molt before migrating south, so, because they are vulnerable while their new feathers grow, they remain out of view and less easy to spot.

Of course, some wood-warbler species are already in full southward migration, including such species as Louisiana Waterthrush, Yellow Warbler, and Tennessee Warbler — among others.