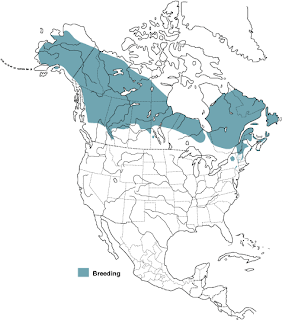 
The answer, Justin (in Sheboygan, WI), is the Blackpoll Warbler.

Nesting in boreal spruce and fir forests of Alaska, Canada, and the n.e. USA, the northern-most portion of this common warbler’s range is a vast swath encompassing Alaska (south of the Brooks Range to the base of Alaska Peninsula); the mouth of Mackenzie River (Yukon), and n.-central British Columbia; east through w. and s. Mackenzie, s. Keewatin, and northern portions of Alberta (south to Banff in Canadian Rockies), Saskatchewan and Manitoba (south to roughly 54°N), and Ontario (south to south end of James Bay); to central Quebec (south of Ungava Peninsula), central Labrador, Newfoundland, the Maritime Provinces, and the ne. U.S.

Interestingly, it’s possible an isolated breeding range for this species occurs in n.w. Oregon, based on a 1976 discovery of young in this area.

Which other warblers breed nearly as far north?

The Palm Warbler subspecies known commonly as “Western Palm Warbler” (Setopha palmarium palmarum) nests in habitat corresponding to the distribution of bogs and fens in boreal forests of Canada and the northern United States.

Warbler Guy, when should I expect to begin seeing migrant-arriving Yellow-rumped Warblers?


Gus, in Wisconsin, you should expect this common wood-warbler to vary annually in its arrival time, given the vagaries of spring weather in the Midwest.

Generally, first migrants north of their winter range occur in the Upper Midwest by as early as late March, but greater pulses arrive beginning in early April and soon after. At this time (often when few if any leaves are present on deciduous trees), the Myrtle subspecies of the Yellow-rumps (Setophaga cornonata coronata) often are the most abundant songbird in forest canopies, causing warbler-seeking birders to repeatedly groan “Another Yellow-rump” as they impatiently wait for more diverse forms of Parulidae (wood-warbler family).

Peak movements of Yellow-rumps in the northern US and southern Canada occur from late April through mid-May. Like many songbird species, male Yellow-rumps migrate earlier than females, averaging 4 to 7 days sooner in their arrival upon breeding grounds.

Keep in mind that some hardy Yellow-rumped Warbler individuals remain throughout the non-breeding season in the Upper Midwest, especially during warmer winters.

As for the typically more West Coast breeding Audubon's subspecies Yellow-rumped (Setophaga cornonata auduboni), its migration dynamic shall be discussed in an upcoming article.