Yes (Edith in E. Lansing), you can take a guided tour to find Kirtland's Warbler this spring and summer. 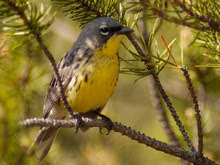 Here, you'll read details about how the U.S. Fish and Wildlife Service and Michigan Audubon Society will jointly conduct guided tours from May 15 through July 4, departing from the Ramada Inn in Grayling, Michigan. You'll need to visit the front desk upon your arrival for the meeting location. The tours will be offered on weekdays at 7:00 a.m. and on weekends and holidays at 7:00 a.m. and 11:00 a.m. Tours are free of charge.
Posted by Daniel Edelstein, M.S. at 10:29 AM 4 comments:

Warbler Guy, is Pine Warbler among the early warbler migrant returnees? What other early migration warbler arrivals should we expect? 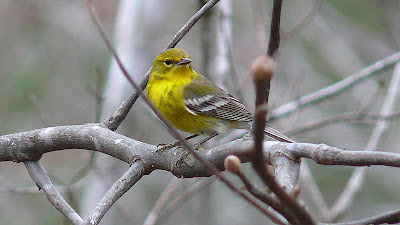 Yes, June: Given Pine Warbler occurs year-round in the southeastern USA, it often
returns early to Mid-Atlantic and Midwestern areas — this year in early April.

In more general terms, immediately north of their year-round range, breeders may appear by late February (with a larger pulse arriving during March). In the southern Great Lakes area, a mid-April arrival is typical (though in early April, 2012, individuals were already reported, for example, in Wisconsin).

According to the Birds of North American Online account for this species, breeders in Ohio first arrive by mid-March, then become common by late March and early April.

New Jersey hosts returning Pine Warblers by early March with larger numbers present later in the month. Spring migration in Connecticut is later, with April a standard arrival date and early May.

Most Pine Warblers arrive in Masschusetts from mid-April to early May. Quebec arrivals can usually be expected by the last portion of April.

As for other early returning warbler species to breeding grounds, they include Louisiana Waterthrush, Yellow-rumped Warbler, Palm Warbler, Black-and-white Warbler, Yellow Warbler, and Nashville Warbler — though annual variation occurs, of course.
Posted by Daniel Edelstein, M.S. at 11:09 AM 14 comments: