Warbler Guy, which West coast warbler vagrants are the most common ones to see? Do vagrant warblers also appear on the East Coast?

On the West Coast, say, on the Outer Point of Point Reyes in N. CA, the most typical East Coast vagrants to see in the fall include Palm, Blackburnian and Blackpoll. Other species that often appear annually: Black-throated Blue, Black-and-white, Magnolia, and Chestnut-sided Warbler. 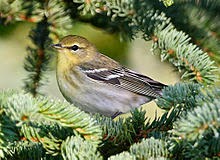 As for the East Coast, it's not as common in autumn to have West Coast breeding warblers show up, but it does occur.

One reason relates to the orientation error displayed by migrating warblers. For many vagrants seen on the West Coast, the cause is due to first-year individual having an innate faulty brain, causing them to navigate south, then west — instead of south and, then, east toward Latin American expanses.
In traveling west by mistake, these newborn warblers continue as far as the land will take them — such as to the far western extreme of Point Reyes National Seashore. Unfortunately, these vagrants meet an unfortunate fate as they eventually continue moving west over the ocean.