Warbler Guy, how many warblers nest where you live in the Marin County, California area?

Thanks, Jeb....I am always flattered (and LUCKY) to see a vagrant Blue-winged Warbler as a rare, cameo-appearing vagrant on the West Coast (and rare to absent many years, though a visit to the Outer Point, lighthouse area within Point Reyes National Park would be your best bet to see this common Midwestern and Eastern USA nester (see figure, below). 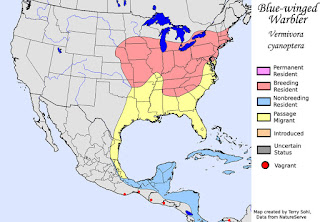 As for northern California nesting warblers in the county where I live in Novato, Marin County (25 miles north of the Golden Gate Bridge), seven species of warblers typically nest annually
in my area — a venue that is, incidentally, the area from where the majority of my guided bird tours begin (Feel free to see the "Birding Tours" area of my web site: warblerwatch.com)

1) Common Yellowthroat (a subspecies of which is a year-round resident);
2) Orange-crowned (with the bulk of this species a neotropical migrant that arrives back as early as February, though the largest pulse arrives annually in March);
3) Yellow-rumped (auduboni subspecies, with higher altitudes in the county hosting nesters);
4) Black-throated Gray (typically restricted to drier open woodlands and forests;
5) Hermit Warbler (probably our county's second most rare nesting warbler next to MacGillivray's Warbler that is rare to sporadic as a #6 nester; and, finally, and last BUT not least:
7) Wilson's Warbler (that is rare to absent during the non-breeding season, but common in moist, bottomlands and riparian areas by April throughout the county, with a early return in March within the Bay Area and Marin County this past 2015 breeding season.

thanks a bunch, Flora